For years, Chromatic managed virtual servers on behalf of our clients. As tools like Platform.sh matured, our team realized we were spending much of our clients’ budgets on simply maintaining those servers—instead of making their sites better (which is kind of our reason for existing).

For one of these clients, the costs of maintaining their fleet of sites/servers were really adding up. So, we decided to move their entire Drupal multisite application over to Platform.sh. On its face, this is a pretty straightforward task. But the wrinkle in this case? It’s a single codebase that powers nearly 20 sites today, with more being added each quarter; each site requires its own, siloed production environment, with slightly different resources and configurations.

When we think about Drupal multisites, we often envision a single codebase running multiple sites in a single production environment. But in this case the environments for each of the 20 sites have always been completely siloed. So while it’s multisite from a codebase perspective, from an infrastructure perspective, these are a fleet of independent sites/projects.

When moving this codebase to Platform.sh, we had to determine how to restructure our deployments to maintain the benefits of a single codebase—without sacrificing siloed production environments. After a fair bit of discussion, we determined that the best solution was to retain our single canonical repository, but to create an individual Platform.sh project for each site. While Platform.sh source integrations work well for keeping a repository in GitHub, GitLab, or BitBucket in sync with the a single Platform.sh project, this approach wouldn’t work for our implementation for one main reason: while the application code is identical between our sites, our Platform.sh configuration files would require slight differences for different disk size requirements or custom web server rules. As it stands in August 2022, the locations of these files are quite specific, and there isn't a way to provide a different set for each site and then have Platform.sh dynamically know which one to use.

Here are our requirements:

We decided to create a deployment artifact for each site. Instead of directly connecting the source repo to the Platform.sh project repos, we would generate an artifact for each site on merge, then commit/push that to the corresponding Platform.sh project repository. In practice, the artifact is very similar to the source—if we’re looking at the number of lines of code changed. But to Platform.sh, they are some very important lines. 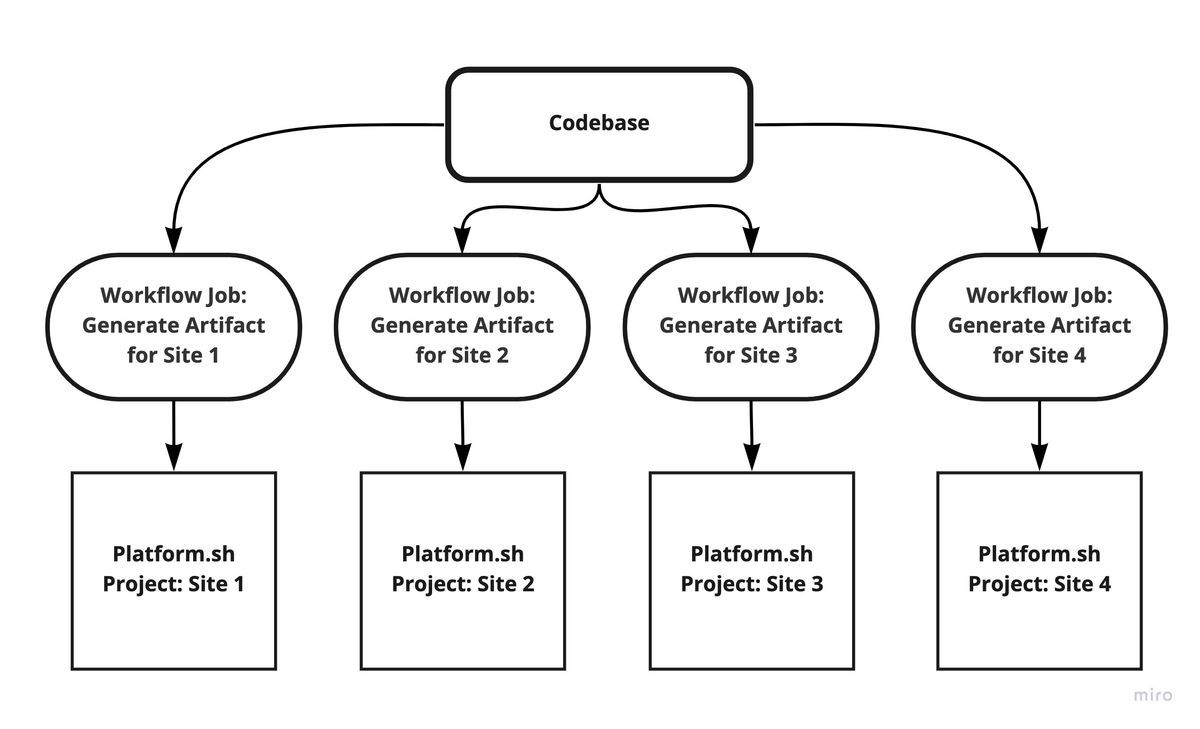 Using Robo to generate the artifact

At Chromatic, we use the Robo task runner extensively (see: Usher, one of our custom tools) across all of our projects, and this project was no exception. Here, we created a command that accepts a site name argument, then generates a build artifact for the specified site. The steps involved:

3. Check if an overridden sitename.routes.yaml file exists. If so, copy it into place (/.platform/routes.yaml) instead of our default version.

We do a great deal of automation with GitHub Action workflows, so using them here was a natural fit. When code is merged to our default branch in GitHub, a matrix workflow job is triggered for each version of the site that does the following to deploy the changes to each Platform.sh project automatically:

A simplified example of this workflow:

Our approach has enabled us to retain all of the benefits of a single codebase powering dozens of sites and all of the advantages Platform.sh grants us. When we’re pushing out new features on the application or simply updating Drupal core, we have an efficient, repeatable, and automated deployment. It saves us and our clients time and money and, ultimately, lets us deliver more value.

Interested in more technical insights from the Chromatic team? Explore their blog.

Mark Dorison is Chromatic’s chief technical officer and partner. Away from Chromatic, Mark is an avid traveler, cyclist, amateur TV critic, and splits a game design studio 50/50 with his daughter Kai.

Feel free to reach out to him via Twitter.

The Results Are In: Platform.sh Drives Both Significant IT/DevOps Efficiency and Meaningful Cost Savings

The secret to managing multiple websites