From the glamour of the red carpet at Cannes to the rugged mountain beauty of Sundance, premier film festivals shine a spotlight on the best and brightest in cinema. The International Film Festival Rotterdam (IFFR) has been and remains widely recognized as a member of this marquee group.

In the wake of the COVID-19 pandemic, like a multitude of organizations, IFFR realized its 2021 event would need to be approached quite differently than any other before it.

With the challenge of creating engaging, immersive virtual experiences that rivaled its in-person festival, the foundation turned to the award-winning team at digital agency Burst, a member of the Intracto Group. With clients like Mentos, Chupa Chups, Davidoff, Knauf, and Pfizer, the Burst team applies its creative spirit and innovation to "make exceptional things happen for each and every client."

In its 50th year, IFFR champions the artistry of both emerging and established independent filmmakers, bringing their films to a wide audience. Historically, the festival has welcomed up to 340,000 in-person participants and more than 2,900 global film professionals each year to view 570 feature, mid-length, and short films from more than 90 countries; a high-quality lineup of exhibitions, performances, and master classes also share center stage.

Establish a technology foundation for the future

First, Burst CTO Jeroen van den Berg and his team tackled the foundation’s server shortcomings, which had impacted its credibility, reputation, and revenue. "To support the 2016 festival, we began with just a Drupal 7 website," explains van den Berg. "There were integrations with the provider responsible for IFFR’s ticketing and user accounts and with the festival management system for the film information, program, volunteers, and the like. Ticketing went smoothly that first year, giving us the trust and confidence to build further on this foundation in the years that followed."

Set the stage for a premier solution

"A little more than a year ago, we began to think about the very rich database of films the festival has access to, much like IMDb (Internet Movie Database)," van den Berg shares. "The database is not only a repository of information about the movies themselves, but about actors, directors, production crew, and more."

Recognizing the Drupal 7-based website had run its course, the Burst team hypothesized about the next step for IFFR and the future of the platform. "What opportunities would emerge if we moved to an architecture where we’d first develop an API to open a wealth of information from all the backend systems to the world, then build a variety of applications on top to consume it?" recalls van den Berg. "After discussions with IFFR, we collectively decided to move forward with this approach to propel the foundation and festival forward."

Platform.sh gave the Burst team the ability to work on the IFFR API, rebuild the IFFR website on Drupal 8, and have different teams develop new apps for the festival simultaneously—without having to worry about infrastructure or process.

On top of all this, the COVID-19 pandemic forced IFFR to digitize their 50th festival, showing hundreds of films online. To execute this monumental task, Burst collaborated with other technology partners to build the film container—custom software that not only functions as a movie player, but includes panes that surface, for example, live Q&A chat sessions with a film’s director or with a panel of guests following a film’s showing, or background information about the film. And the panes can be displayed side-by-side.

A layer of data sources serves as the foundation of the IFFR solution, including the Drupal 8 content management system in an headless architecture, the customer relationship management system, a ticketing system, festival organizational management, and custom video-on-demand software. The IFFR API provides the middle layer between where the data is stored and where it’s wrapped up into a nice, neat package.

Touchpoints and apps sit on top of that API, offering features to enhance festival-goer experiences: from personalized schedules and film recommendations based on user profiles to social media posts and the opportunity to watch films in their entirety. It’s a perfect example of a modern Microservices, APIs, cloud-native Software-as-a-Service (SaaS), and Headless (MACH) ecosystem. 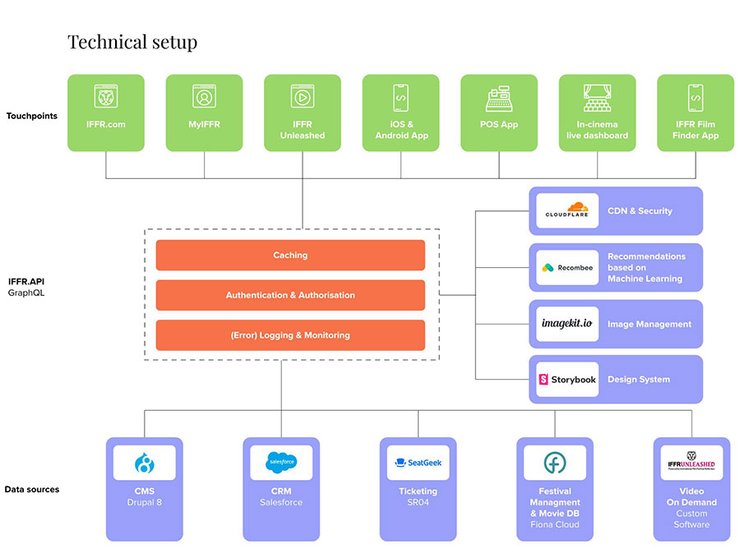 The first app Burst developed on top of the API was the Film Finder app—designed to fill in gaps in a participant’s schedule. Like Tinder for movies, the app enables a user to view a movie trailer and respond to it by indicating, "I like" or "I dislike." Based on the responses and film tickets purchased, the app—in combination with Recombee, a SaaS machine learning API—begins to learn each user’s profile and builds movie recommendations aligned with those preferences. Says van den Berg, "It’s easy to Integrate the two APIs, and ticket sale conversions increased in just the first year in market."

The dynamic, In-Cinema Dashboard aggregates all social media posts associated with a specific hashtag and displays them, along with information about the film, on the big screen before a film begins to play. Built in-house by the IFFR team, the point-of-sale system assists IFFR volunteers onsite in the theaters. And IFFR Unleashed, the IFFR answer to Netflix, gives festival participants access to all the films for which IFFR holds the rights.

Through My IFFR, a user’s personal account, individual attendees can view purchased tickets, schedule, agenda, and more. Finally, iOS and Android apps and the IFFR website offer additional capabilities and points of access to complete the immersive, holistic user experience.

"By migrating the festival infrastructure to Platform.sh, IFFR has the agility needed to adapt to the new cultural norms driven by the pandemic," says Hans Maltha, Burst founder and CEO. "Before COVID-19, the festival crowded the city of Rotterdam for 10 days each year with excited movie-goers. This year, the scalability, expandability, and tooling we’re able to tap into with Platform.sh helped us bring the event online, accommodating virtual crowds and burgeoning demand. In this way, we’ve made the festival’s 50th anniversary possible while creating new, exciting opportunities for future festivals."